The coffee plants are shrubs or trees cultivated in tropical regions and belonging to the genus Coffea of the Rubiaceae family. There are two main species of coffee beans, Coffea arabica (65%) and Coffea canephora (35%). Coffea arabica, which produces a fine, aromatic coffee, requires a cooler climate than the Coffea canephora (robusta), which has higher caffeine content. The more disease-sensitive and less productive arabica plant is therefore restricted to higher altitudes, whereas the robusta variety can be grown on the low lands, producing higher yields.
The coffee trees are evergreen shrubs with opposite oval leaves, which, generally, prefer a certain amount of shade (these originally being grown under the shade of trees). They produce fleshy fruit, being bright red, purple or yellow in colour, that are known as coffee cherries or coffee berries, with two nut-like seeds that each contain a coffee bean (the coffee berry is an example of a polysperm drupe).  Beneath the outer flesh or pulp the berry is enclosed in a parchment skin, a tough wrinkled shell-like coating corresponding to the hull or endocarp. Underneath the parchment skin the coffee beans are still covered by a thin transparent membrane known as the silver skin or integument, which can be removed by polishing.
The unit of measurement for coffee beans is the 60-kg bag. For a number of years, global coffee production has exceeded 100 million bags per annum, which corresponds to 6 to 7 million tonnes per year, while only 100,000 tonnes was produced in 1825. More than 80 million bags are exported each year. This upward trend has not stopped there, however; production increased by 20% between 1997 and 2005, i.e. twice as fast as the demand curve.  Brazil is by far the largest  global producer, with a third of the total volume, i.e. 40 million bags, followed by Vietnam (the leading producer of robusta) and then Colombia.

The oldest and most traditional method of growing coffee is the extensive system, still practised in certain parts of Central America and India. With this coffee-growing technique, the coffee plants are grown with other taller crops, which protect them from the sun’s rays.
On the other hand, with the intensive method, which is common in Brazil, the coffee plants are grown at a higher cropping density and require the use of irrigation and mechanisation systems. A significant level of investment is required but the yields are higher. In the areas of coffee-production developed more recently in Brazil – Cerrado Mineiro and Baiano – there is increased mechanisation among the producers who have already received financing, with irrigation also being used to improve yields. More than 100,000 coffee plantations are now equipped with irrigation systems. The small family farmers have joined forces, forming co-operatives once again in order to take advantage of the use of a growing number of modern techniques.
Coffee culture, which up until now has remained traditional and conservative with regards to innovative technologies, is finally accepting the benefits of irrigation. Several studies clearly show how coffee productivity is severely affected by long-term water shortage, especially during the critical stages of flowering and fruit set.
The final size of the bean is entirely dependant on the amount of precipitation between weeks 10 and 17 after flowering; the period during which the bean grows fastest.
In some species, such as Arabica and Robusta, there is twisting of the buds before they open. This occurs when water stress is created after small amounts of rain have prompted the initial growth. As a result of the twisting, they cannot reach the opening stage and therefore dry up.
B. Sobrinho (1985) states that this twisting — unopened buds or dried flowers (stars) — is a typical phenomenon caused by high water shortage. It can result in yield loss of up to 50%.

The introduction of irrigation reduces the percentage of dried flowers (stars) from 57% to less than 5%, with some percentages practically negligible (Rena / Maestri, 1987 and Thomaziello, 1999). When the productivity results of non-irrigated, irrigated and fertigated coffee were compared, there were increases of 66% and 123% in the irrigated and fertigated zones respectively (Antunes). According to Mantovani (2003), the irrigation of coffee plants is recommended for most coffee-producing regions in Brazil.
The need for irrigation stems not only from the water shortage, but also from the annual mean temperatures. With temperatures below 18o C, irrigation is necessary with an annual water shortage of 150 mm. With temperatures between 18ºC and 24ºC the water shortage is more damaging. In these cases irrigation is recommended with water shortage of 100 mm.
In 2003 it was estimated that 8-10% of the Brazilian coffee plantations — a total of 200,000 Ha — were already being irrigated. This irrigation took place mainly in the states of Espirito Santo (60-65%), Minas Gerais (20-25%) and Bahía (10-15%). 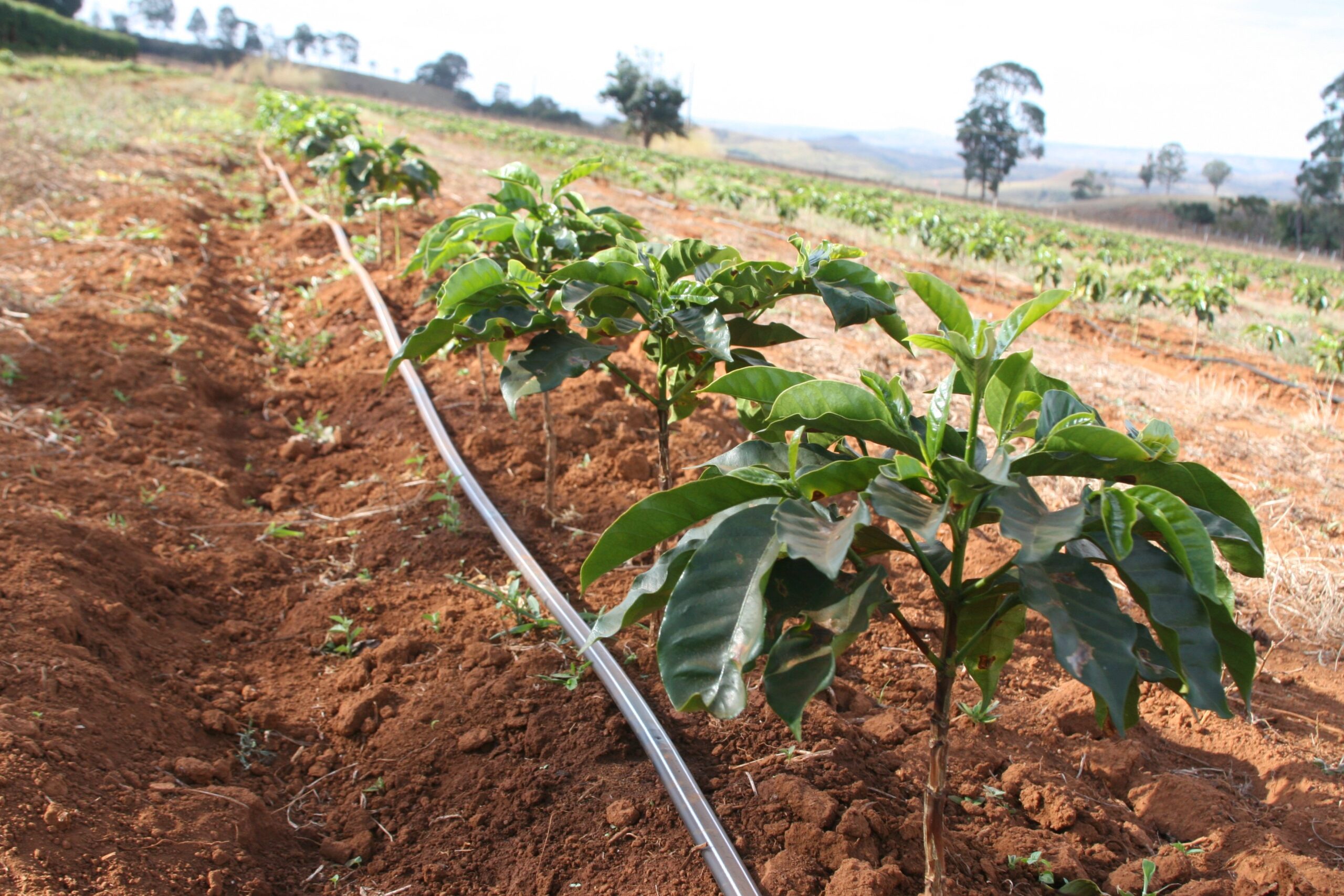 Setting up an irrigation system

The localized irrigation systems comprise of: water source, pumping system, filtering system, main distribution network, control heads, valves, automation, and emitters (micro-sprinklers or drippers).
Water source. Water may come from wells, reservoirs or rivers.
Pumping system. Centrifugal pumps are used with electric motors (single or three-phase). Diesel or gas oil motors are used in areas with no electricity.
Filtering system. The purpose of the system is to prevent clogging of the emitters. Various filtering means are used, such as sand, disks and nets. The filter must be selected according to the chemical and biological characteristics of the water being filtered.
Main network. This network leads the water from the pump to the irrigated subdivisions. Steel, PVC or polyethylene tubing is used. The technical parameters (pressure and flow rate) must be observed.
Zone Control Head. Located at the entrance of the subdivisions, these trestles may be configured with different components, such as anti-vacuum valves, air relief valves, basic valves (ON/OFF), and regulating valves. The valves open and close the flow, regulate the pressure in the subdivision and prevent vacuum in the network.