Coffee is one of the most beloved beverages worldwide. Part of its appeal has been attributed to the fact that coffee has a higher caffeine content than most naturally produced beverages, such as tea and cocoa. In this article we will look at the process of coffee production from seed to your cup. 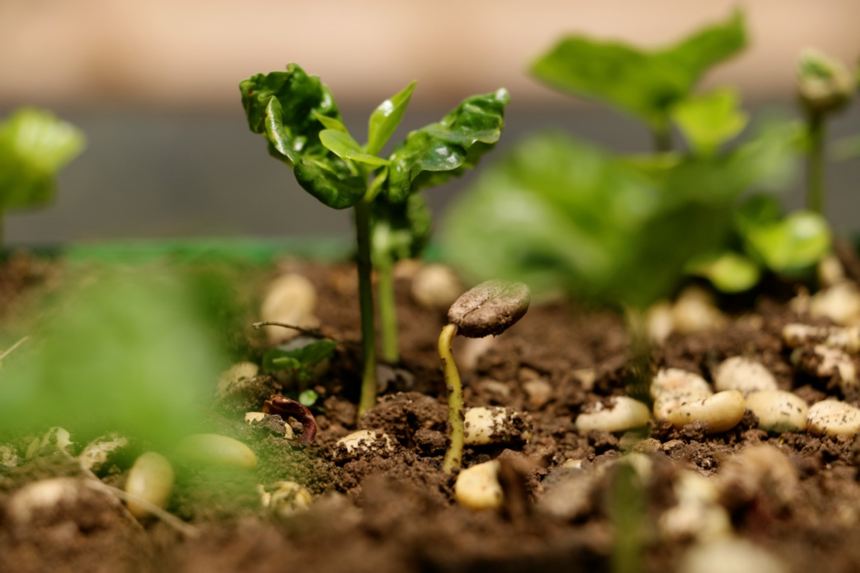 Coffee beans are actually seeds. It’s only after they have been dried, roasted and ground that they can be used to brew the humble zip. If unprocessed coffee seeds are planted, they can germinate and grow into coffee plants. The seeds are normally planted in large shaded beds. After sprouting, the young seedlings are left to grow for a few days before moving them to individual pots with carefully formulated soils for optimal growth. The potted seedlings are shaded from the scorching sun and watered frequently until they’re vigorous enough to be moved to their permanent growing place. Planting is best done during the rainy season to ensure the soil will remain moist as the roots get firmly established. 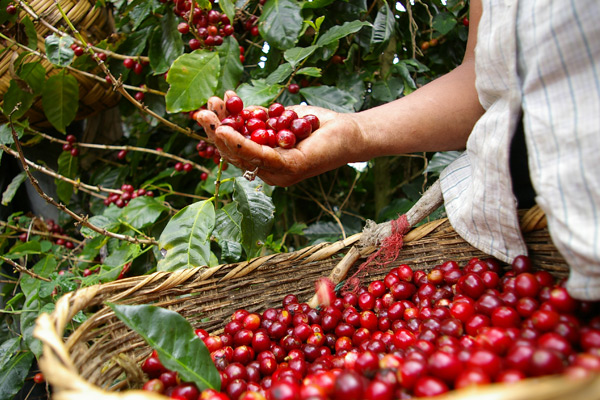 Depending on the specific variety, it takes approximately 3-4 years for newly planted coffee bushes to bear fruit. The fruit, commonly termed cherries, depending on the degree of ripeness, turn from green to bright or dark red – the unripe ones being green in colour. Cherries ripen faster under lower altitudes and higher temperatures. Coffee can be hand-harvested by people to ensure that only the ripe cherries are picked. Hand-picking is a hard and labour intensive process where people need to carefully check cherries for ripeness and, naturally, it involves paid labour. Cherries mature at different periods and up to three pickings are needed to clear a farm. Whether by machines or humans, coffee is always harvested by one of the following two methods:

Wet milling, the step that comes after harvesting, is focused on separating the fruit of the coffee cherry from the oh-so-precious bean within, This can be done in a variety of ways, using different machines and techniques. One of the more common approaches involves the use of a pulper. This spiked drum works by tearing the pulp of the coffee from the seeds (aka beans) which then fall into a tank. The coffee ferments in these tanks to loosen any remaining fruit so beans can then be thoroughly washed. 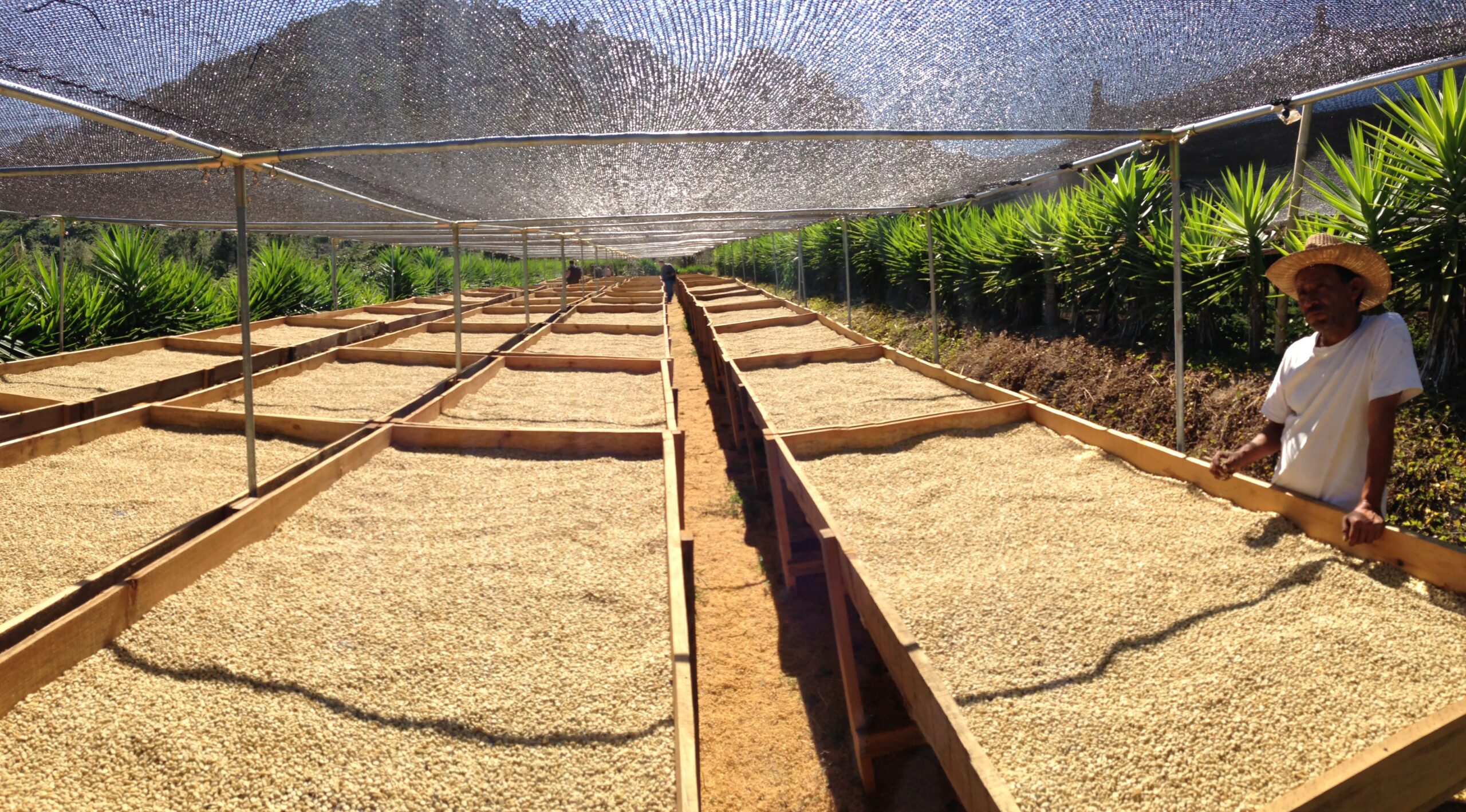 Once the washing is complete, the coffee must be dried before it can undergo any further processing. This can be done manually, on sun patios, or in mechanical dryers (or frequently with some combination of the three). The proper drying of coffee is crucial to halting the gentle fermentation that began to take place during the wet milling. If the dehydration takes too long, is too harsh, or doesn’t get the beans into the right moisture range the coffee’s flavor can be greatly affected. After the coffee has successfully gone from its starting moisture content of nearly 60% to 11-13% it can be transferred to the dry mill. 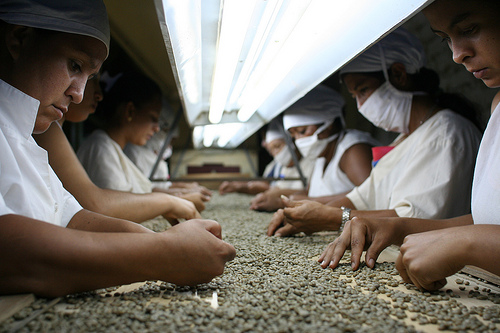 High-quality coffee beans move through a battery of machines that will sort the actual coffee beans by density of bean and also bean size, while getting rid of sticks, rocks, nails, along with assorted debris which could have become combined with the coffee beans during drying. First of all machines blow the coffee beans into the air; the ones that fall into bins nearest the air source are usually the heaviest and the biggest; the lightest (and most likely defective) coffee beans as well as chaff are generally blown in the farthest bin. Various other machines shake the coffee beans by using a combination of sieves, sorting them by size. Last but not least, a device known as gravity separator shakes the sized coffee beans over a tilted table, to ensure the heaviest, densest along with the very best coffee beans vibrate to one side of the pulsating table, while the lightest to the other.
The last step in the cleaning and sorting process is referred to as color sorting, or removing flawed coffee beans from very good coffee beans according to color as opposed to density or size. Color sorting could be the toughest as well as the most significant part of sorting and cleaning. Groups of employees pick out discolored together with other defective coffee beans from the very good beans. The very best coffee beans could be hand-picked two times (double picked) or maybe three times (triple picked). 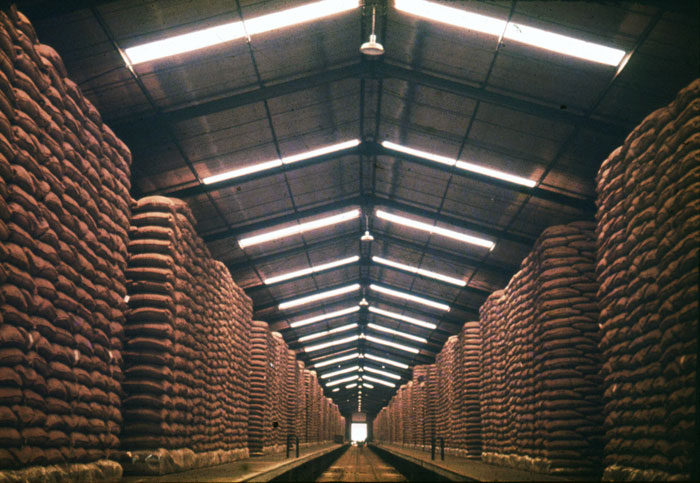 Before exporting, the coffee beans are sorted by shape and looks (“How Coffee is Processed & Roasted”). After, the coffee beans are stored in sisal or jute bags. The coffee is loaded into shipping containers or it is bulk shipped inside plastic lined containers (“Ten Steps to Coffee”). Coffee is the worlds most traded agricultural commodity. It accounts for exports worth an estimated $15.4 billion in 2009/2010 when around 93.4 million bags of coffee were shipped.
Brazil makes up a majority of World Coffee Exports. Brazil is the world’s largest exporter of instant coffee and ground/roasted coffee. Coffee exports generated %5.15 billion in revenue for Brazil in 2013. Brazil will export an estimated of between 32 and 33 million bags of beans in 2014. 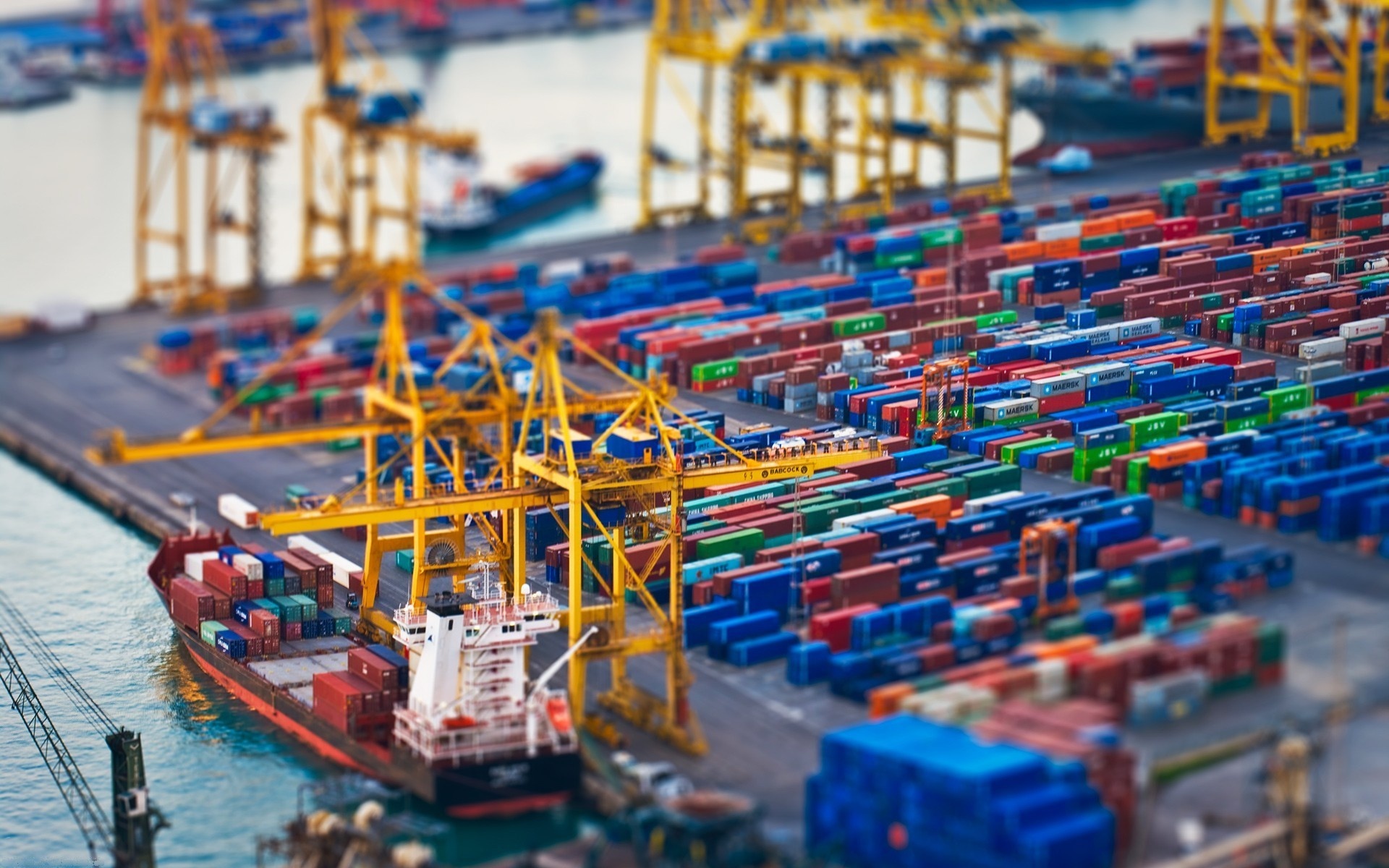 The United States is the largest importer of green coffee worldwide with approximately 2.5 million bags per month. Germany was the second largest, then Italy, Japan, and France (“The Coffee Industry’s Supply Chain”). Once the coffee beans have arrived, the beans are visually inspected. They are then taste tested in a process called “cupping” (Read our article about cupping by clicking here). After this process has took place, the coffee beans are stored in a warehouse before being shipped to the roasters. 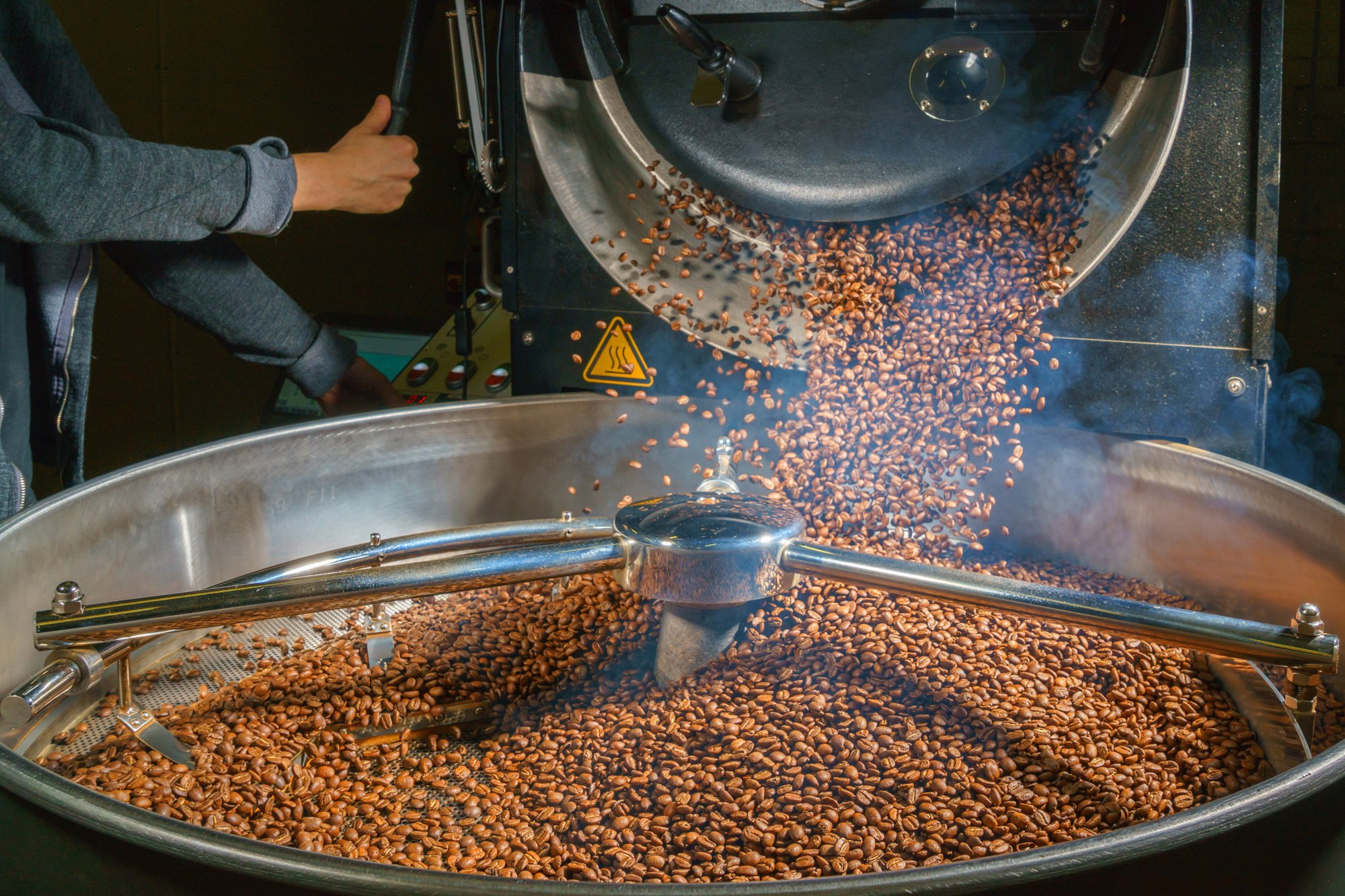 Unroasted coffee is also known as green coffee and such beans have all the flavours locked in them. Roasting seeks to transform the green coffee into the aromatic brown beans you buy in your favourite stores. Roasting is carried out at temperatures of approximately 550F during which time the green coffee beans are turned continuously to avoid burning. Green beans are first dried until they become yellow and develop roasting smell. Once the beans register an internal temperature of 400F, the step called ‘first crack’ happens during which the beans double in size and start to turn light brown. After that, as the temperature continues to rise, the colour changes to medium brown and a fragrant oil (caffeol) starts to emerge.
This roasting stage is called pyrolysis and is the heart of roasting. It gives coffee the aroma and flavour that you witness every time you drink this magical drink. At this stage, coffee is light or medium roasted and roasting process can be stopped or continued to obtain a darker roast. After first crack and first pyrolysis, beans are absorbing heat until they reach an internal temperature of around 440F, at which point the ‘second crack’ happens and the second pyrolysis begins. Beans turn from medium dark to dark brown and you can see an oily sheen. Once roasting is complete the beans are usually doused in huge amounts of water to cool them off instantly. 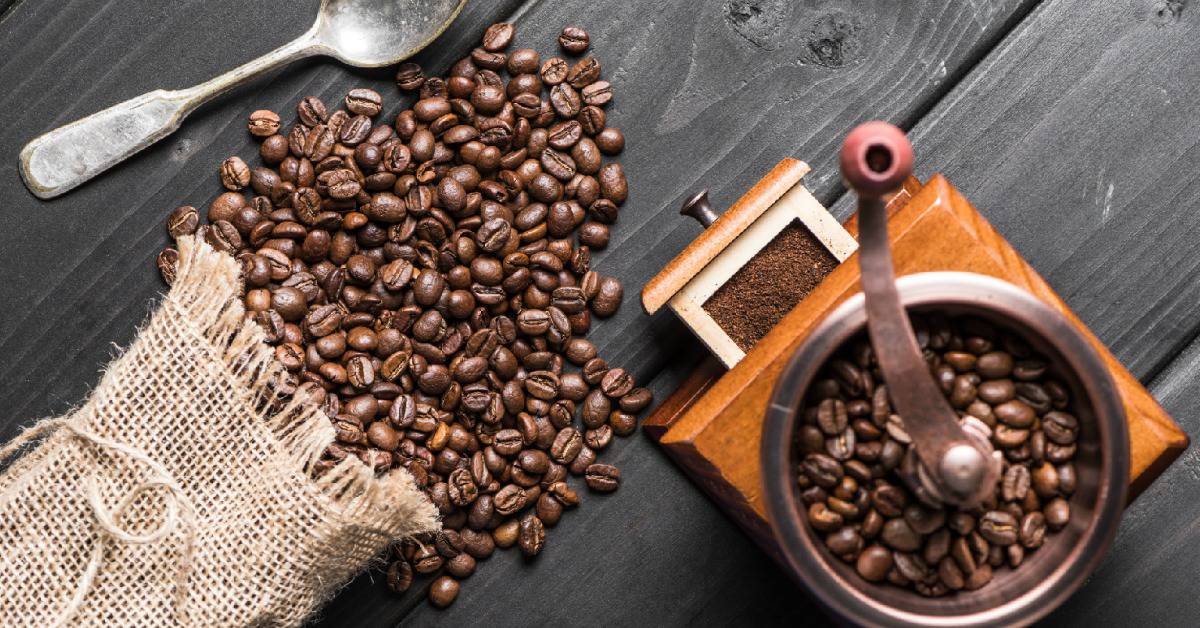 The primary goal of a grind is to produce the most flavour in a cup of coffee. The type of coffee brewer used determines how fine or coarse the coffee should be ground. The type of grinding determines how fast the coffee can release its flavours. This is the reason espresso coffee is so finely ground. On the other hand, coffee prepared with filter coffee makers is coarse-grained (coarsely ground).

Coffee packaging is very important, as any exposure to air could turn the coffee into a lump. This is especially the case for ground coffee, which can quickly lose its flavour if exposed to air. This is the reason why coffee is usually packed in airtight containers and should be resealed carefully when not in use. 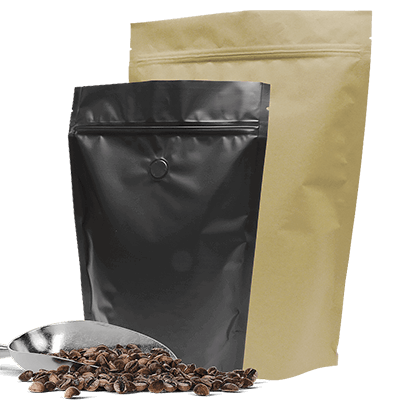 Brewed coffee is made by pouring hot water onto ground coffee beans, then allowing to brew. There are several methods for doing this, including using a filter, a percolator, and a French press. Water seeps through the ground coffee, absorbing its constituent chemical compounds, and then passes through a filter, producing the wonderful liquid we all love. 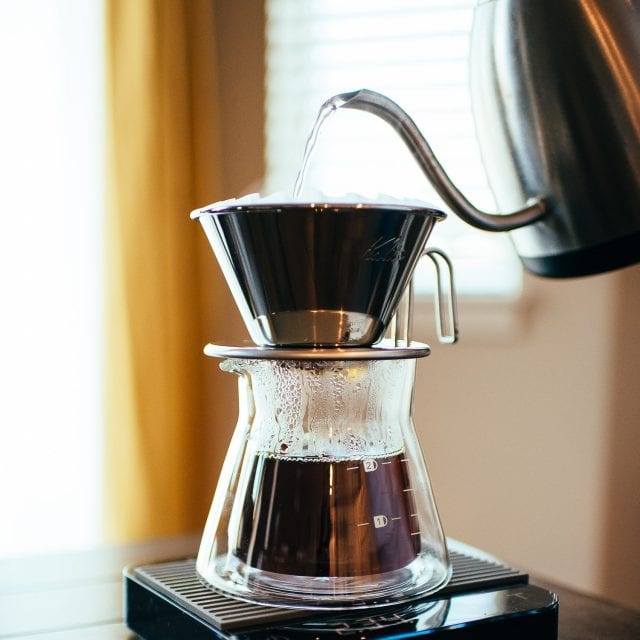 Home
Our Coffees
Blog
How to Buy
Request a Sample